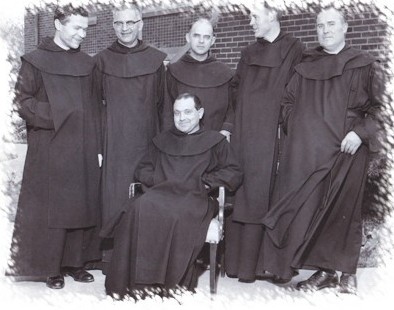 After World War II, for various reasons, a few Carmelite monks from the Polish province found themselves in western Europe. Two of them came via Siberia with general Maczek’s army, two young fathers escaped to Rome in 1939 to joined those, who had already been in Rome when the war broke out. In 1948 three of them arrived in the United States and started work in American monasteries.     In the following year, supported by father provincial Anzelm Gadek, they decided to establish a Polish monastery in the USA to work among a new wave of the Polish post war immigrants. In Autumn 1949 they opened a house in Hammond near Chicago, in 1952 they moved to Munster. On 17 June 1950 the Jurisdiction of Order Affairs carried out a canonic erection of a monastic house under the jurisdiction of the general of the order.

Only after 1956 closer contacts of the new monastery with the Polish province became possible. Since 1957, from time to time Polish monks have subsequently been joining the community in Munster. In 1970 the monastery was joined to the Polish province, two years later it became the seal of the prior. The pastoral work of the community was concentrated on the work in the community’s own chapel, serving organized retreat and pilgrimage groups, pastoral care of Polish societies as well as help in Chicago parish churches, mainly Polish ones. As the time went on, a number of constructions were completed, such as an attractive Virgin Mary’s cave, cross route with Calvary and the tomb of Jesus, a church (1972), a new monastery (1981), a chapel devoted to Virgin Mary of Sharp Gate in Vilnius, and a chapel of the Podhale (Polish highlands) region. Every year the church fair devoted to Virgin Mary of Ludzmierz gathers a few thousand immigrants from the Polish highlands. In 1988 the monastery established its branch in Corona, Florida, which in 1993 became a separate monastery of the Warsaw province. In 2003 the Munster community took pastoral care of St. Camilus Parish in Midway, Chicago.

The Commitment of the Discalced Carmelites among Polonia in USA

After the Second World War, a group of Polish Discalced Carmelites, including former chaplains of the Polish Army, came to the United States.  They fulfilled St. Raphael Kalinowski’s dream of a Polish Carmel in America when they established a monastery in Hammond, Indiana. Two years later they moved to Munster, Indiana, in the Diocese of Gary, where they immediately began their pastoral ministry among the Polish-American community in the Chicago metropolitan area. They built a monastery and Shrine dedicated to Mary under the title of Our Lady of Mt. Carmel, and in the monastery garden constructed a grotto in her under the title of Our Lady of Lourdes.  On the upper level, around the altar in the Chapel of Our Lady of Częstochowa, they placed urns with the ashes of prisoners who were murdered in Nazi concentration camps and Soviet labor camps. 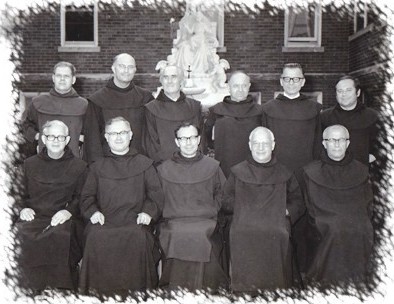 In subsequent years, a monument to the Sacred Heart of Jesus was erected at the entrance to the Shrine, while the monastery garden itself was adorned with a Polish Highlanders’ chapel dedicated to Christ as the Man of Sorrows and His Mother Mary under the title of Our Lady of Ludźmierz, a monument of St. Therese of the Child Jesus, as well as a monument of St. Maximilian Kolbe, the martyr of Auschwitz. In the monastery building itself, following the election of Karol Wojtyła to the Chair of Peter as the first Polish pope, the Fathers built a Pope John Paul II hall containing a photo exhibit of his life and apostolic pilgrimages as well as a bronze life-size sculpture of the Holy Father Himself.

Alongside the monastery church, the Fathers built a chapel dedicated to Mary under the title of Our Lady of Ostra Brama, and later added the St. Raphael Kalinowski Pilgrim Center and Banquet Hall near the entrance to the shrine. In 2004, Pope John Paul II bestowed on the Carmelite Monastery the distinction of receiving his “Golden Rosary,” issuing on that occasion a special Papal Bull in which we read: “To Our Lady of Ludźmierz, Queen of the Polish Highlanders, honored at the Carmelite Shrine in Munster, in the Chicago area, as patroness of the Polish Highlanders’ Union in North America, I bequeath as a votive offering the Golden Rosary, a filial chain which, through Mary, binds us to Jesus.  (…)  To all those devoted to the Mother of Christ and to the pilgrims who come to the Carmelite Shrine in Munster – the “American Ludźmierz,” I cordially impart my Apostolic Blessing.” The Carmelite Fathers in Munster have provided for the pastoral needs of the Polish-American community in a number of ways: by serving the many pilgrims to the shrine; helping out in local parishes, especially on weekends; providing religious instruction for St. Raphael Kalinowski Polish Saturday school, hosting the Millennium Choir, as well as serving as chaplains for the Pope John Paul II Senior Citizen Society and the Secular Carmelite Order.

In addition, to meet the needs of Polish-Americans in the Chicago area, the Discalced Carmelites of Munster served for many years in various Chicago parishes, including St. Bruno’s and later St. Priscilla’s parish.  In the fall of 2003, they assumed pastoral care of Polish-Americans at St. Zachary’s parish in the Chicago suburb of Des Plaines, and in August of the following year, began to serve the entire parish of St. Camillus in Chicago.A most significant initiative of the Polish Carmelites in Munster, moreover, was their settlement at the end of the 1980’s in Korona, Florida, where they established a shrine dedicated to St. Joseph.The Polish Discalced Carmelites, as spiritual sons of the great Spanish mystics, St. Teresa of Jesus and St. John of the Cross, and fellow countrymen of St. Raphael Kalinowski, have faithfully put into practice the charism of their Order.  Aware of the signs of the times, they work untiringly to serve their fellow Poles throughout the world, of which the United States is a prime example.  In this way, the Polish friars implement the directives of the Servant of God Pope John Paul II as well as the Papal Council for the Pastoral Care of Migrants and Travelers.