At the Carmelite Shrine in Munster, IN (USA) 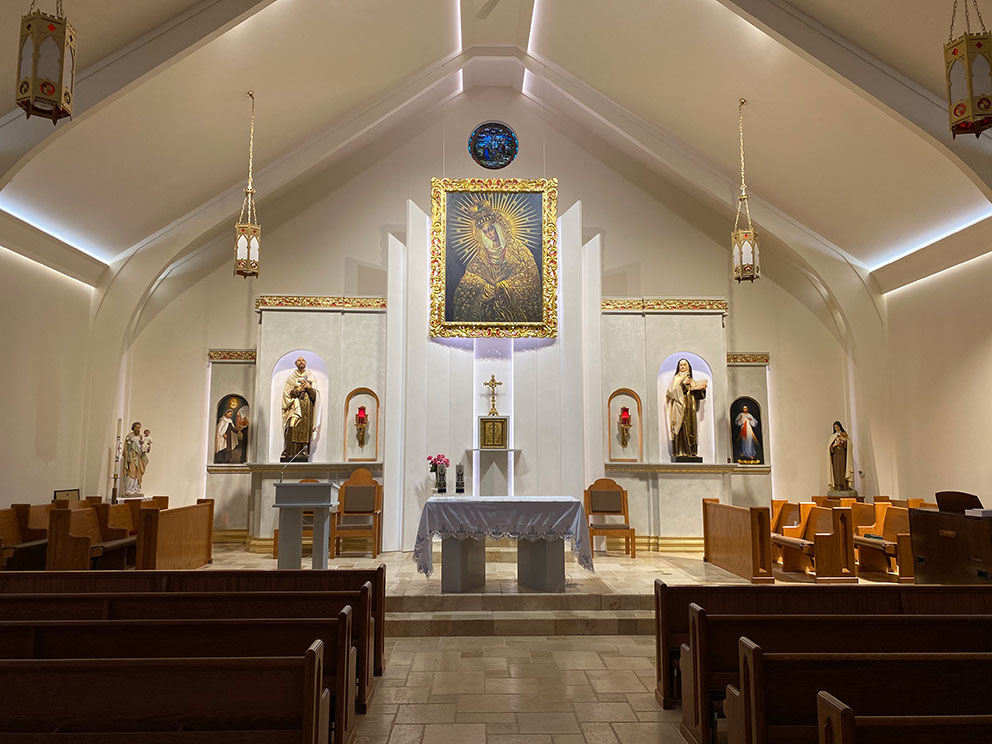 The image of Our Lady of Ostra Brama (of Mercy), adorned with graces, is located in the former Carmelite Monastery in Vilnius (now in Lithuania). Since many of the Polish Carmelites who founded our monastery on American soil had previously lived in Vilnius, they therefore wished to nurture a love and devotion for the Blessed Mother under this title here as well.

On the occasion of the 70th anniversary of the founding of our monastery, we decided to carry out as general renovation of the Chapel of Our Lady of Mercy. For the same reason, a new image of St. Raphael Kalinowski also came about, painted especially for this chapel by Nadiya Savka, an artist from Chicago. 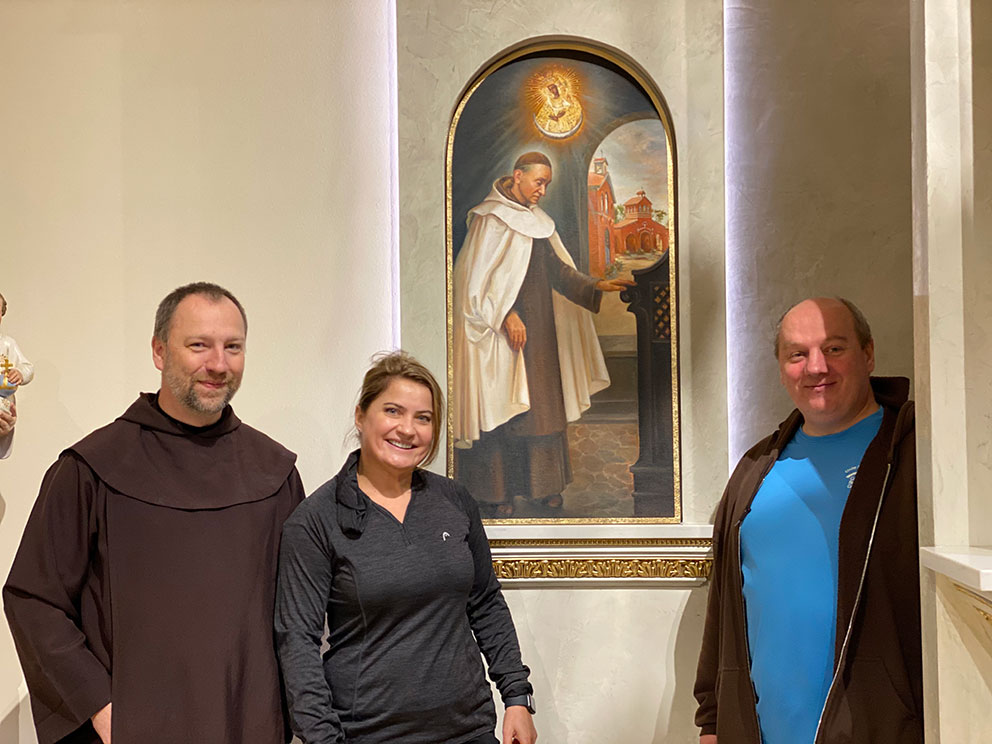 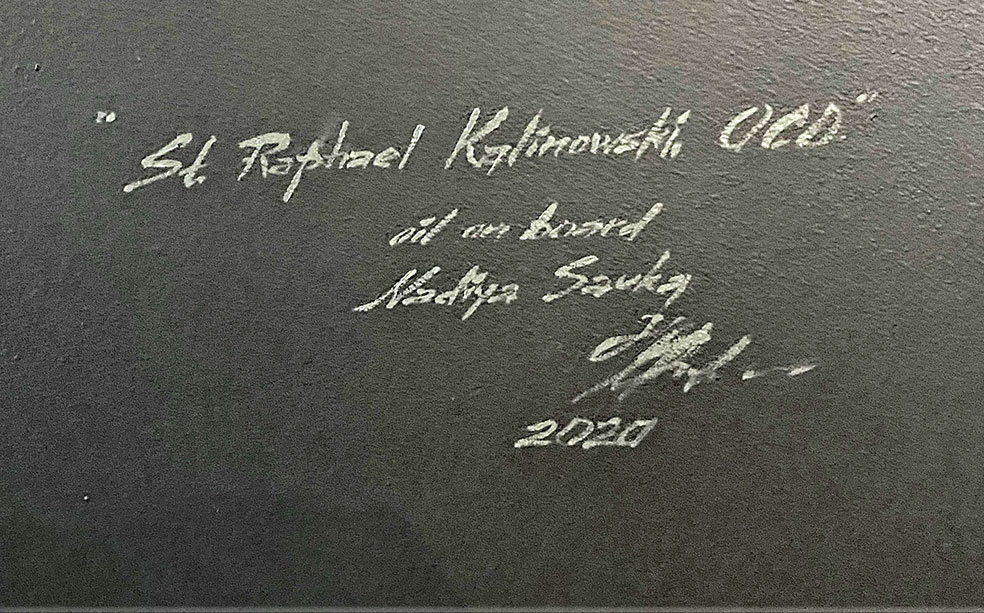 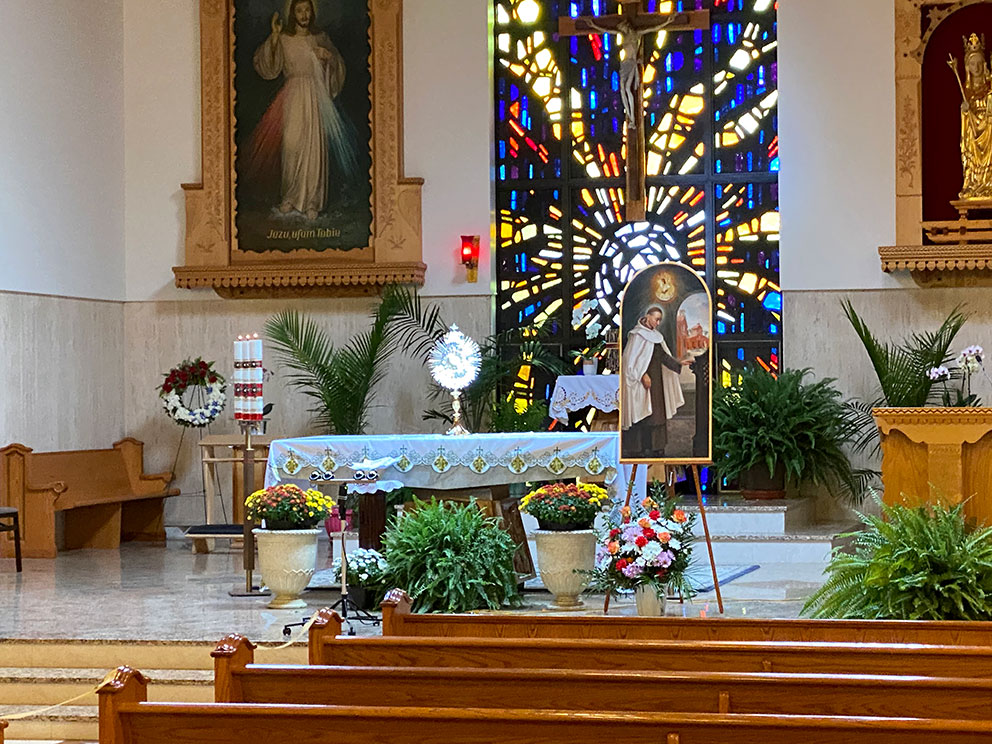 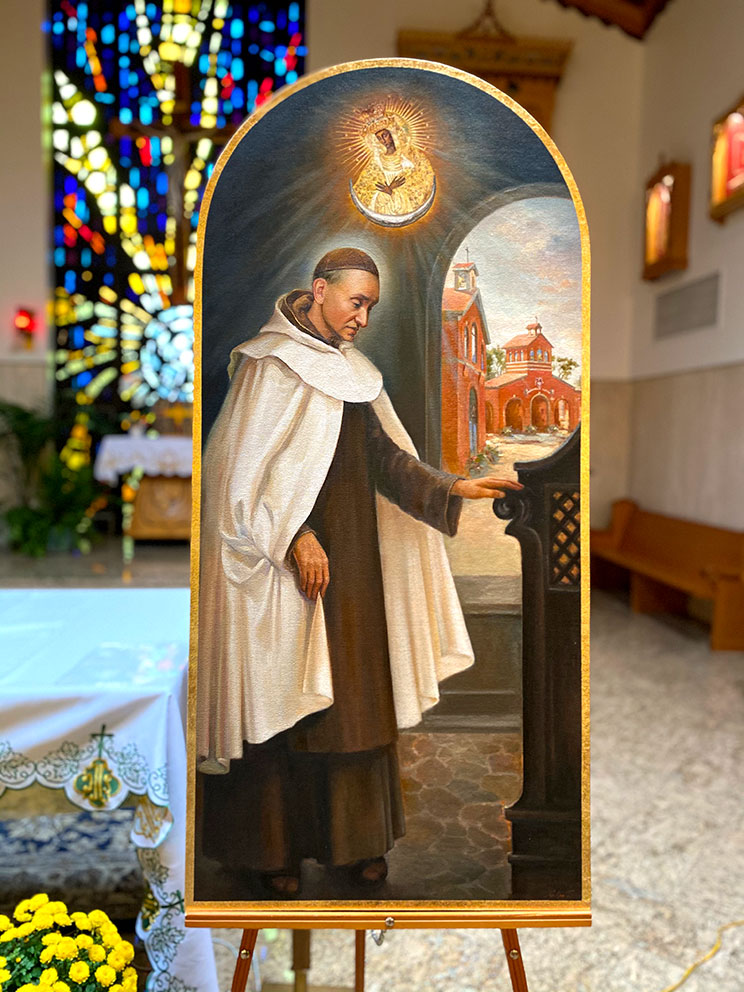 The presence of this saint’s image in our chapel is not accidental. As we know, St. Raphael Kalinowski was born and lived in the shadow of Ostra Brama. He is therefore spiritually connected with Vilnius, the city of Divine Mercy, in which St. Faustina, inspired by Jesus’ appearances to her, assigned to the painter Eugeniusz Kazimirowski the task of painting the image of Divine Mercy. A copy of this image from Vilnius was also painted by Nadia Savka and placed in our chapel.

This image of St. Raphael Kalinowski is patterned after the portrait for his canonization painted by Danuta Waberska. A slight difference is the outline of our shrine in the background of the painting. Although St. Raphael never lived here, we believe that we experience his intercession at our shrine. From its inception, our monastery “became a confessional” not only for Chicago’s Polish-Americans, but also for the faithful from the surrounding parishes. For this reason, St. Raphael, as a patron for Carmelites, confessors, teachers, and immigrants is a model in showing us how to receive and share the gift of Divine Mercy with others. 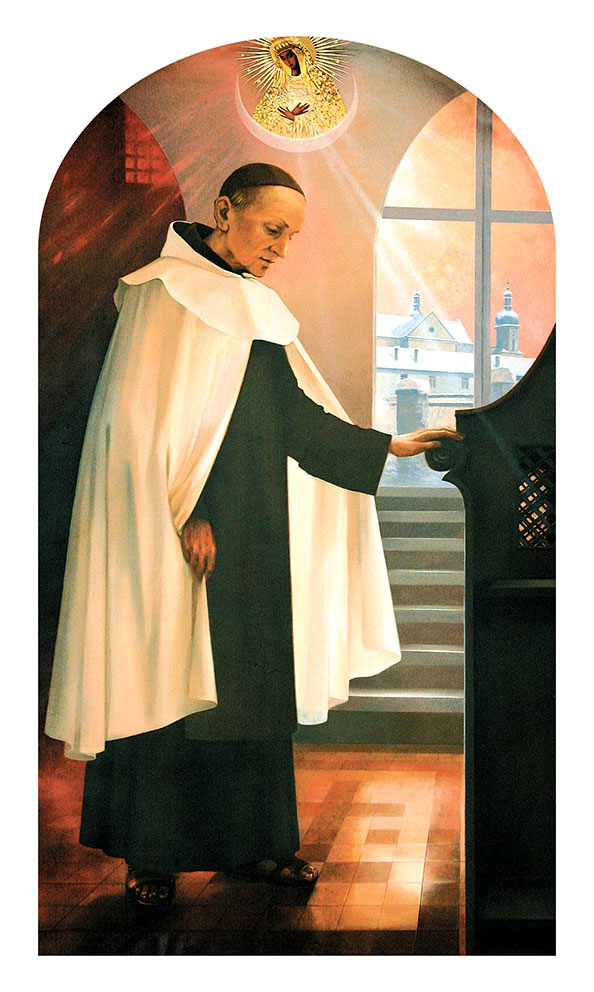 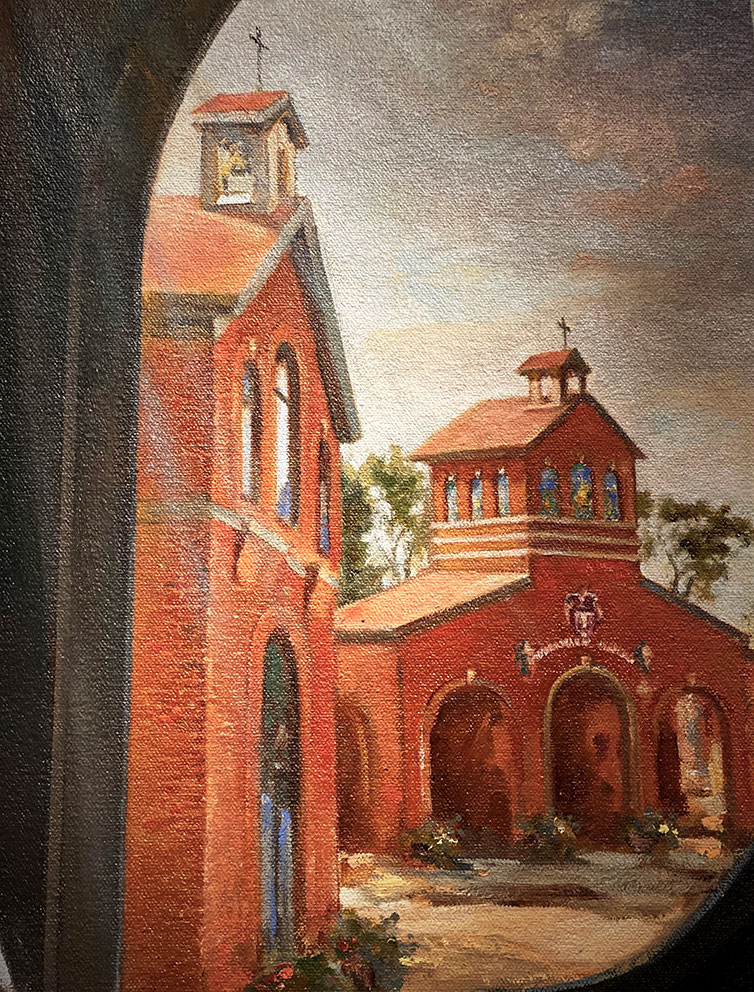 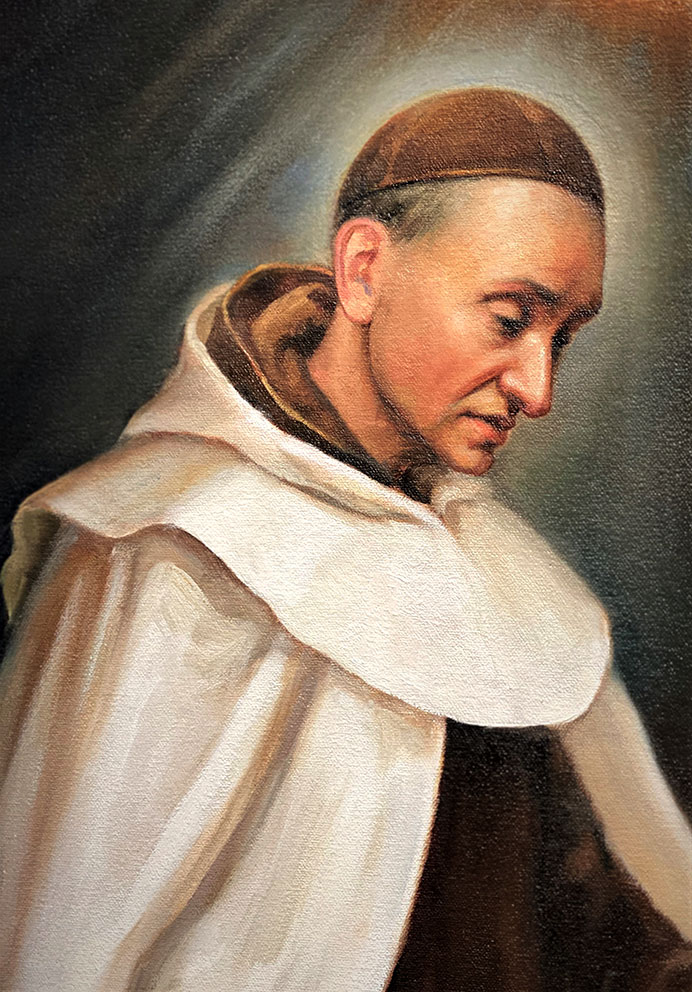 – excerpts from the letters of St. Raphael Kalinowski

Good people are like fresh air, which everyone breathes, although it can’t be seen” (Letter 120, line 3 – January 15, 1869). These words perfectly describe St. Raphael himself.He was always very humble.He never did anything for show.When he noticed his neighbors in need, he did many good works in secret, in accord with the Biblical exhortation: “Do not let your right hand know what your left hand is doing.”

Love is humble, does not make a loud noise for all to hear, and is selfless.Without human goodness and love, just as without the air we breathe, no life is possible.

St. Raphael lived in turbulent times.When the uprising of his people against Russia no longer had any chance of succeeding, he became its leader for all of Lithuania.He acted thus because he wished to avoid unnecessary casualties.“It is not an excess of blood that we need to flow over Polish territory, but of sweat” – he wrote of his fatherland in a letter to his brother Victor (Letter 36, March 17, 1863).

After being imprisoned, in order to defend his comrades, he took total responsibility upon himself, which is why he received the death penalty.In the end, his sentence was commuted to 10 years of forced labor in Siberia.This was almost the same as a death sentence, since only a few made it there, dying along the road, while those who survived the journey covering thousands of miles died later from exhaustion and other diseases.

At that point, he had lost everything:family, security, freedom, his professional career, his health, his whole future.At such a moment as this, he wrote in a letter to his family from the town of Tomska:

“The world may strip me of everything,

But there will always remain one hiding place inaccessible to it:prayer,

In which the past, present, and future can be summed up

In the form of hope.

O God, how great a treasure is this, which you grant

After many years, when he found his place and vocation in Carmel, St. Raphael was a highly regarded confessor. He resolved to serve his neighbors and pass on to them what is most important in life: God’s mercy, grace and hope.

In a letter to his sister-in-law Helena Kalinowska, he wrote:

“One must know that in the interior life of the soul, when it is a matter of progress in the love of God, the enemy of our soul, the evil spirit sets before us obstacles, apparent difficulties, fears, coldness, timidity, and laziness, which make us burdensome, so that we cannot go where the will of God is calling us and where we will find those things which are useful and necessary for our salvation.

And from the opposite direction, the evil spirit can, on the surface, even make the good look easy for us, in order to turn us from that good which is truly good.He allows us to be self-satisfied, so that we may sense the sweetness of something which in principle is good, but in a concrete case brings us no spiritual benefit (…)

Our perfection depends on a thorough understanding of the words of our Lord: “Seek first the Kingdom of God…” (Mt 6,3), that is, to seek God Himself and only God, and to put these words into action.This allows us to live in the world (…) and maintain a heart that is free, in order to devote it completely to God” (Letter 611, January 11, 1891).

St. Raphael did not leave us a body of writings but instead mainly wrote letters, often regarding concrete matters of daily life.He taught not so much with words, but above all by the example of his life.Only some of his sermons and prayers have been preserved.Among the most beautiful of these, we can include the following:

“Grant me, O my God, humility and simplicity;

Grant me the grace not to regard myself as something more than I am,

May I never value myself above what I truly am,

Than I am before You, who know the secrets of my heart.

Help me to esteem the work, talents, and virtues of others,

Without flattery, condescension, and envy,

But rather in sensitivity to the truth, with sincere worthiness and authentic love”

“I consider myself the property of others” (Letter 62,15/December 15, 1864).St. Raphael expressed these and similar words (“I am exclusively the property of God.”), St. Raphael in heroic love of God and neighbor.Trust, simplicity and fidelity to his daily duties as well as his offering of himself to others mark the basic feature of his spirituality.Even amid the greatest trials, he never lost hope, for he knew that he was always “in God’s hands.”He had boundless trust in God, Who can always draw good from the worst suffering and evil.

“God Himself suffices. All our refuge consists of fleeing to God,

With fervent prayer both for ourselves and our neighbor”

In these last words we hear an echo of the prayer of St. Teresa of Avila: “Let nothing disturb you, let nothing frighten you./ All things are passing, for God alone remains./ With patience you will obtain all things, / for nothing is lacking to the one who possesses God./ God alone suffices”.